With all 299 of Germany’s electoral districts reporting, the SDP won 25.7% of the vote, beating out the Christian Democratic Union (CDU), the centrist-right, conservative party of Chancellor Angela Merkel, which posted record losses by taking 24.1%, according to the Federal Returning Officer.
But there is still uncertainty over who will be the next leader of Germany. Both the SPD and the CDU with its coalition partner, the Christian Social Union (CSU), have said they want to begin coalition negotiations to form a new government.
Likely coalitions in Germany will either see the SPD or CDU/CSU forming a government with the Green Party, which took 14.8% of the votes, or the liberal Free Democratic Party (FDP), with 11.5%.
Merkel, who over 16 years cemented her position as one of the world’s most successful political leaders, will stay in job until a coalition deal is negotiated — and that could take months.
After Merkel’s election win in September 2017, it took more than five months for a government to be formed. 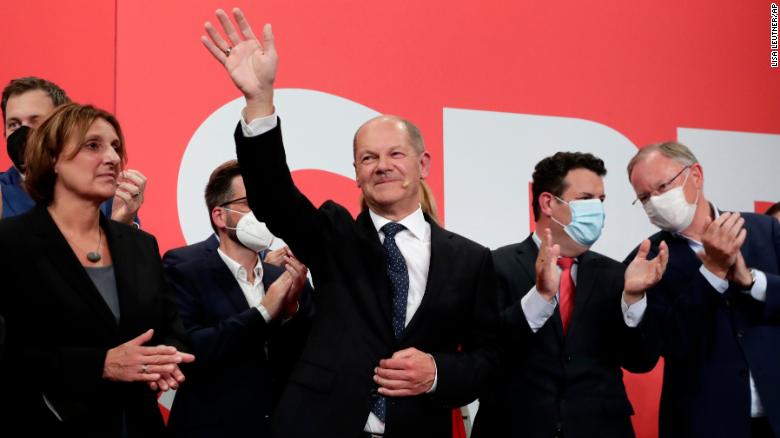 SPD’s Olaf Scholz waves to his supporters after German parliament election at the party’s headquarters in Berlin, on September 26.
Though the preliminary count gives the SPD a small lead over its closest rivals, the results mark a significant improvement for the party that took 20.5% of the vote in the last election in 2017.
Its leader Olaf Scholz said voters wanted him to be next chancellor.
“Many citizens have put their crosses next to the SPD because they want there to be a change in government and also because they want the next chancellor of this country to be called Olaf Scholz,” he said in remarks at his party’s headquarters. 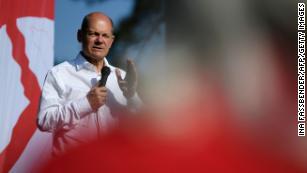 loading...
The 63-year-old politician has served as the vice-chancellor and German finance minister in Merkel’s grand coalition government since 2018, earning him increased visibility as he navigated Germany’s economic response to the pandemic.
“Pragmatism, optimism, unity that is what we will show because that is what counts, and I am sure the citizens will also be happy post election about their decision,” Scholz added.
By contrast, the CDU leader Armin Laschet told supporters, the party “cannot be content with this result,” while noting that the final result remained unclear.
“We can foresee that there could be a government with three parties,” he said, adding the party would “do everything to try to build a coalition.”
Laschet added that the CDU had “got a mandate against a leftist government.”
The party had campaigned on a message of stability for the country after Merkel, seen as a steady pair of hands over the past nearly 16 years, steps down. But it is now coming to terms with what it itself called a bitter night of losses. 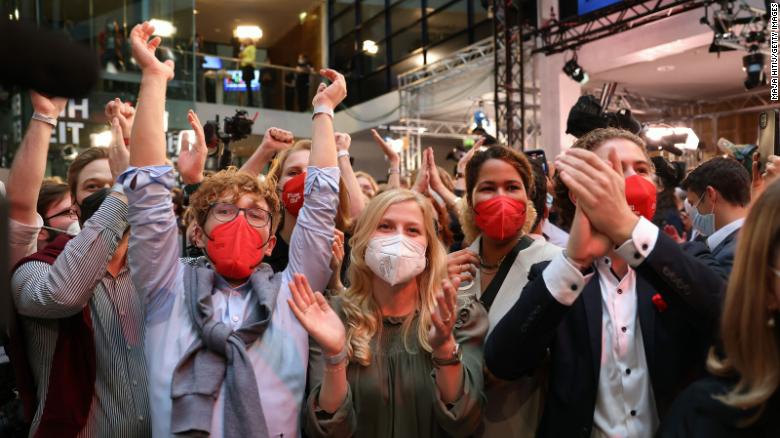 Members of the German Social Democrats (SPD) react to initial results at SPD headquarters in federal parliamentary elections on September 26 in Berlin, Germany.

Robin Fugmann, 20, an ardent Scholz supporter, told CNN he was delighted by the results so far.
“It is really an amazing result, people believe in Olaf Scholz, people believe that Armin Laschet really cannot lead this country,” he said. “So we really have the mandate to lead a new government — I hope we will do so. And first of all we are going to celebrate because this is a really amazing result.”
Deborah Piraba, a 27-year-old law student and Young Christian Union Democrat, told CNN at the CDU headquarters that the results were “disappointing” but that nothing was lost yet.
“We have to consider that we are coming out of 16 years with Angela Merkel, whom I am a big fan of. I am already sad she is leaving the office,” she said. “We call her Mutti (Mom), she knew how to talk to people and has the connection with people and she has done so much for Germany. This made her so special comparing her with other politicians. I will also miss her sense of humor.” 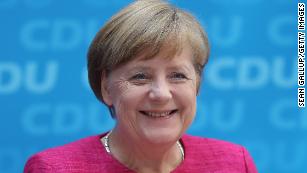 Angela Merkel saw Germans through crisis after crisis. Now they wonder who’ll fill the void
Meanwhile, Greens’ leader Annalena Baerbock said the party “led a campaign as we have never before experienced in this country — around the clock, until last night, the last second.”
Environmental concerns and economic worries have emerged as key issues in campaigning, with the former fueled by the deadly floods that devastated parts of Germany this summer.
Baerbock credited her party’s success to young and new voters. “This momentum from the market places, from so many [people] who joined our party in the last years, has led to this historical best result,” she said.
But, Baerbock added, the party had “wanted more” and had failed to do better in part because of mistakes by her during campaigning.
The AfD’s lead candidate for chancellor, Alice Weidel, put on a brave face after exit polls showed a drop in support for the far-right party. Preliminary official results put the count at 10.3% of the vote, down from 12.6% in 2017.
“We are in the double figures, we have been able to assert ourselves,” she said, according to Reuters. “This assertion that we would be gone from parliament after one legislative period has utterly failed and we are very very happy.”

The outgoing government remains in office as acting government until it is replaced by a new government. Merkel, 67, will then stand down and the new chancellor will take the reins.
According to tradition, the leader of the strongest party will have the first shot at trying to form a government.
But German expert Holger Schmieding, chief economist at Berenberg Bank, said it will be the center-left Greens and the pro-business FDP that will decide the shape of the next government.
“After potentially lengthy ‘sounding out’ talks, these two parties will either team up to put Olaf Scholz (SPD) or — slightly less likely — Armin Laschet (CDU/CSU) into the chancellor’s office,” he said.