The Sri Lanka Navy saved an elephant that was stranded out at sea. The animal was caught by the current before being rescued.

The Sri Lanka Navy saved an elephant that was caught by the current and drifted some eight nautical miles out to sea. The animal was initially noticed by a Fast Attack Craft on routine patrol, the navy said and divers were directed to the location.

A group of officials from the Department of Wildlife also joined the task providing the necessary instruction which became extremely vital in the rescue mission. Accordingly, they were able to carefully direct the elephant towards the coast from the deep sea, by means of ropes. 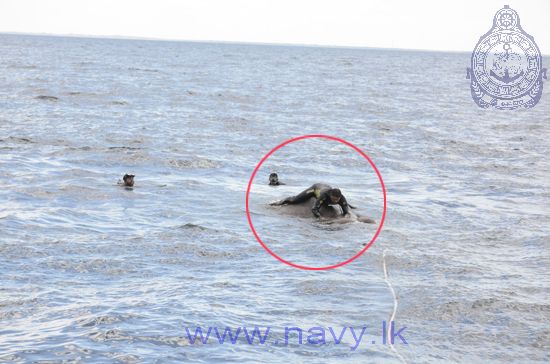 Having safely guided the elephant to the Yan Oya area in Pulmodai , the animal was handed over to the Wildlife officials for onward action, the Sri Lanka Navy stated in a press release.