How much money Britons spend on holidays

The number of visits made by overseas residents to the UK in February 2017 remained stable compared with the same period a year previously, while UK residents made fewer visits abroad, according to the latest data released by Office for National Statistics (ONS).

Despite the decrease of the number of visits made by UK residents, they spent more on their visits abroad in February 2017, when compared with February 2016. An increase was also registered for overseas residents.

The main trends in visits and spending 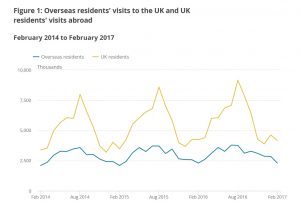 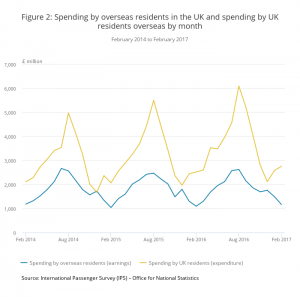 These countries are the safest to travel to

The reported spend for visits include any spending associated (excluding fares) with the visit, which may occur before, during or after the trip.

However, UK residents show a much sharper peak both in visits and spend during the month of August, which is traditionally the only complete month of the UK school summer holidays,” ONS reports. 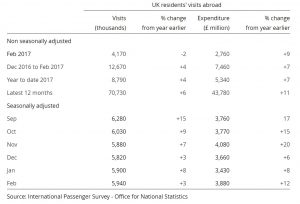 Office’s data also show that, during the period December 2016 to February 2017, the number of visits to the UK grew up by 8% from 7.4 million to 8.0 million compared with the corresponding period a year earlier. “Visits by residents of all areas of the world increased, with the exception of Other EU countries (those that joined the EU after January 2004), which decreased by 1%. Holiday visits for this period rose by 15% to 2.6 million and miscellaneous visits rose by 17% to 780,000, largely driven by the “watch sport” reason for visit,” ONS revealed. 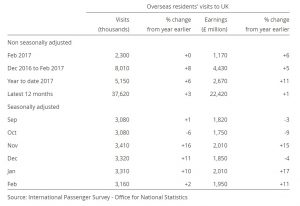 Also, in the 3 months to February 2017, spend in the UK by overseas residents increased 5% on the previous year to £4.4 billion. 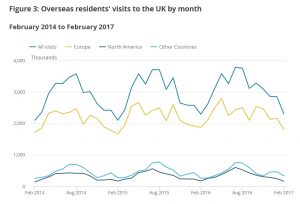 “During the period December 2016 to February 2017, UK residents’ visits abroad rose by 4% compared with the corresponding period a year earlier and they spent 7% more. Split by area of visit the largest increase was visits to Other EU countries (those that joined the EU after January 2004), which rose 14%. When looking at reason for visit, business visits fell by 6% from the same period in the previous year but all other reasons for visit increased.

The largest increase, 23%, was for miscellaneous visits, although the numbers were relatively small,” ONS reports. 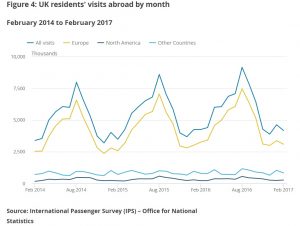 Easter 2017 brought more expensive holidays for families. How you can cut the costs for any vacation

Estimates are based on interviews conducted when passengers end their visit and the survey sample size is approximately 20,000 per month. Any visits commencing in the reported month but not completed until later are not included in estimates for the reported month.