The Natural History Museum in London unveiled the new star of its reimagined Hintze Hall, previously occupied by Dippy.

The Natural History Museum is expecting its visitors on Friday with a reimagined Hintze Hall. The 25.2-metre-long blue whale skeleton suspended from the ceiling will greet the visitors, just like Dippy did, just a few months ago.

The Museum has named the female blue whale Hope, as a symbol of humanity’s power to shape a sustainable future. Blue whales were hunted to the brink of extinction in the twentieth century, but were also one of the first species that humans decided to save on a global scale.

“This is a landmark moment for the Museum and for the millions of people from all over the world who visit us. The transformation of Hintze Hall represents a new era for us as a natural history museum for the future, said Sir Michael Dixon, the Museum’s director.”We are living at a critical point in the history of the Earth. This generation’s decisions will have an unprecedented impact on the world we live in. It is within the grasp of humanity to shape a future that is sustainable, and now more than ever we want our galleries and exhibitions to inspire a love of the natural world, and our scientific expertise to inform solutions to the big, global challenges we face.”

The skeleton now on display in Hintze Hall is from a whale that became stranded in 1891 in Wexford Harbour, Ireland, 10 years after the Museum opened in South Kensington. It was bought by the Museum and first displayed in the Mammal Hall in 1934, where it was suspended above a life-size model of a blue whale, though it was not in full view.

“In her stunning new home, she is even more spectacular. It is impossible not to be struck by the sheer scale and majesty of this beautiful creature as she dives towards you when you enter the Museum,” said the museum’s leading whale expert, Richard Sabin.

It took months for the crew, made out of curators, conservationists and engineers, to clean, move and place the 221 bones that compose the skeleton and it is the only one in the world that it is hung in a diving, feeding position.

“Hope is the only blue whale skeleton in the world to be hung in the diving lunge feeding position”, said Lorraine Cornish, the Museum’s Head of Conservation.”Suspending such a large, complex and historical specimen from a Victorian ceiling was always going to be challenging, but we were determined to show her in as lifelike position as possible and we are thrilled that the result is truly spectacular.”

The whale is not the only novelty that visitors will notice. Hope will be joined by hundreds of new specimens and 10 star specimens chosen to celebrate the wonder and beauty of the natural world, from the origins of the universe to the story of evolution and diversity in the world today. 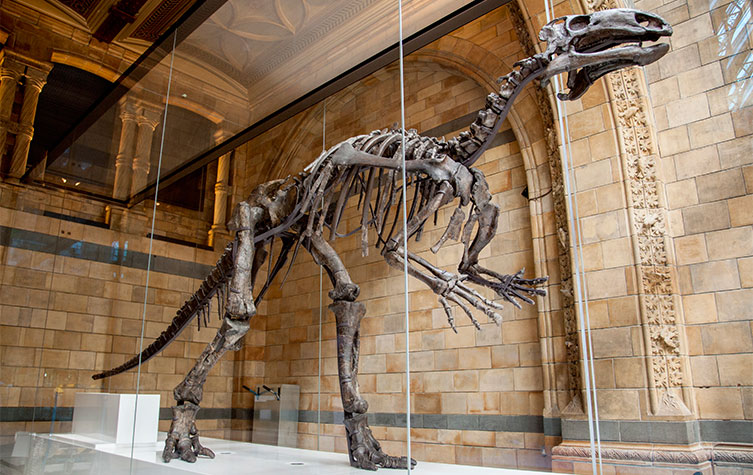 Hope takes the place of Dippy the Diplodocus, the dinosaur skeleton cast that was on display in Hintze Hall from 1979 until January 2017

Our countdown to #HintzeHall is nearly over so it’s time to unveil Hope the #BlueWhale as the latest member of the global #MuseumWhales pod! pic.twitter.com/1kv0cbxvBc